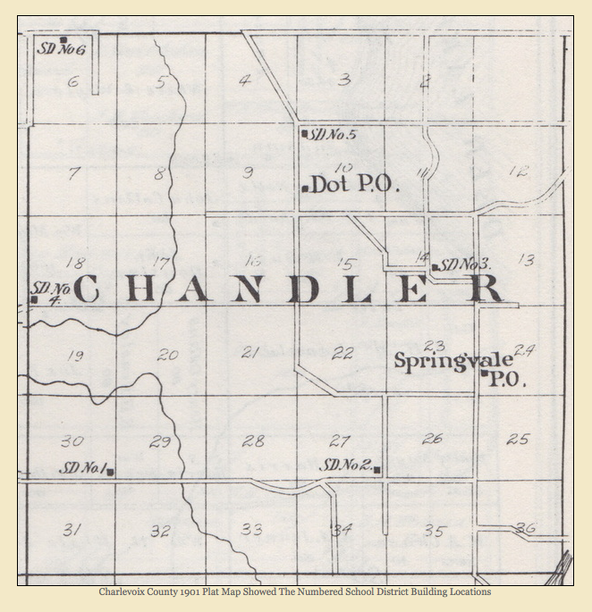 Please do not copy the photos on this site, many of which have been submitted by private individuals...
just come back and visit the site often to view the photos. 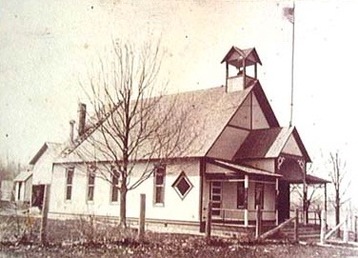 About 1912 ~ Before Standard School building requirements
Compare the windows in the building photos above. The Standard School sign hangs over the porch entry to the building. When Dana School became a Standard School [Page 5 on the PDF], the windows on the side of the building had to all be removed, except the diamond shaped window, and maybe moved to the other side of the building. At the turn of the 19th century, "it was commonly accepted that light should only enter over the left shoulder of students, so that eye strain could be prevented. Window shades provided a standard solution for older buildings, but new structures increasingly only contained windows on one wall to control the incoming light".
TEACHERS IN DANA SCHOOL
1921 ~ Miss Edith Sellers of Warsaw, IN
Mrs. Orthella (Porter) DeNise 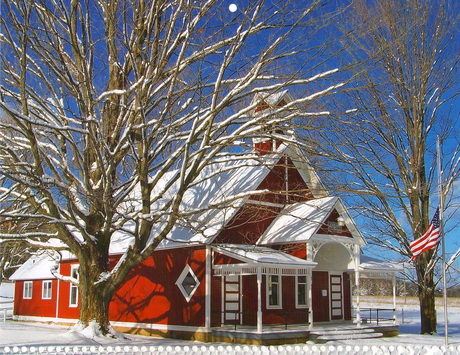 Photo Above: Lisa Engler Howard, photographer and Chandler Township resident,
took the beautiful photo above of the Chandler Township Hall
which was published as a page in a calendar and was then distributed by banks all over the State of Michigan. 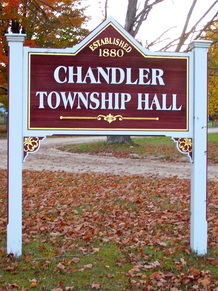 7 October 2006
Marion Mackie Wood Chandler Township resident wrote in her January 1, 1946 diary:
"Our school was closed because so many children had mumps." 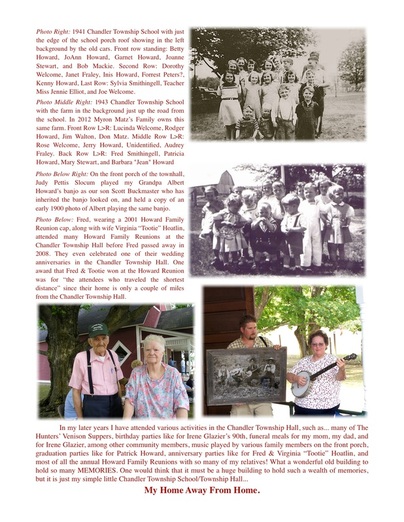 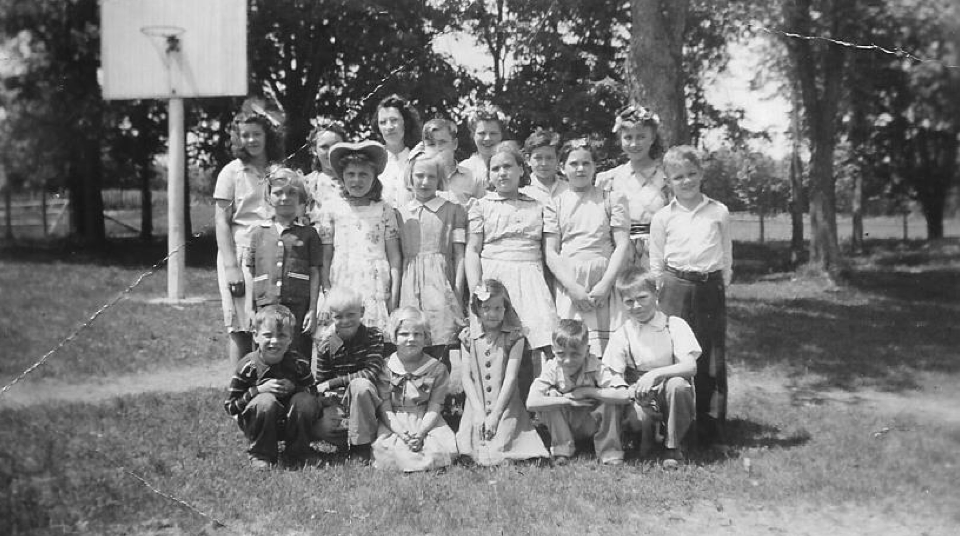 8 May 1962 ~ Petoskey News Review
Mrs. DeNise, in the photo above, was my teacher in Chandler's elementary school from my Kindergarten year, until 5th grade when I moved into Walloon Lake's Melrose School, and had Mrs. Berg for 5th grade. Mrs. DeNise had moved into Melrose School then too, and was the principal, plus she taught 6th, 7th, and 8th grades, so, I had Mrs. DeNise again for those years as well. She was a wonderful person, and an even greater teacher! Orthella and her husband Cadet DeNise were buried in the Boyne Valley Cemetery Boyne Falls MI. (Cadet 1898 ~ 1982 and Orthella 1899 ~ 1986)

In the photo below are my Chandler Township school classmates as labeled below the photo. ~ Karla Howard Buckmaster 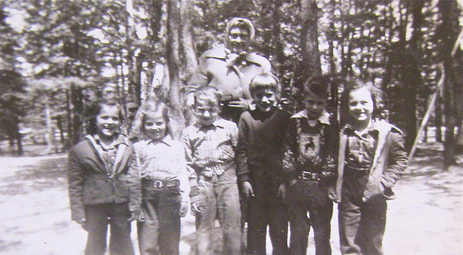 L>R: Joyce Matz, Karla Howard, Carl Stewart, Peggy Currie, Rob Glazier, and Judy Matz with teacher Mrs. DeNise in back.
Marion Mackie Wood wrote in her January 19, 1950 diary: "The bus went past so I guess we are having school. - I hope the kids all have warm clothes on this bitter morning."

Marion Mackie Wood wrote in her February 22, 1950 diary: "Roddy has been out of the school for 1 month. His ear still bothers him, aching at times, and now he's just getting over the chicken pox - so his mother expects Karlie and Karl to get it soon. She's so worried. - All the kids in school have the darn things".

Marion Mackie Wood wrote in her April 13, 1950 diary: "No school - Bus broke down near Penfolds".

Photo Below: Charlevoix County employed a traveling doctor and nurse who visited the county schools
to give shots, to check for head lice, and for other various medical services.
While this photo was taken at Melrose School in nearby Walloon Lake, Dr. Litzenburger and Nurse Rice
were the same dedicated medical team which visited Chandler Township School (SD No. 1). 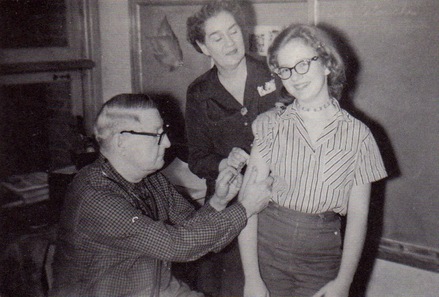 1958 Walloon Lake yearbook "The Lakers" showed Charlevoix County doctor and nurse (Dr. A.F. Litzenburger and Mrs. Marion Rice R.N.) giving a shot to student Carol Everts in the Walloon Lake School.
I had written my memories in the newsletter on this webpage, above on page 3, regarding Dr. Litzenburger and Nurse Rice's visit to Chandler Township School when I was attending there: "My least favorite memory from Chandler Hill School involves the school’s county Dr. Litzenburger, and county Nurse Mrs. Rice. Although they really were very nice people, whenever I saw Dr. Litzenburger walk into one of the main doors, I would run to hide behind the huge old wood furnace toward the back of the school room. I knew their appearance meant nothing, except some type of great torment, for me, and the rest of my classmates... like hurting shots (required vaccinations), or maybe a check for head-lice; with Dr. Litzenburger or Mrs. Rice using the eraser ends of pencils to separate the hairs on our heads to look for the tiny creatures." 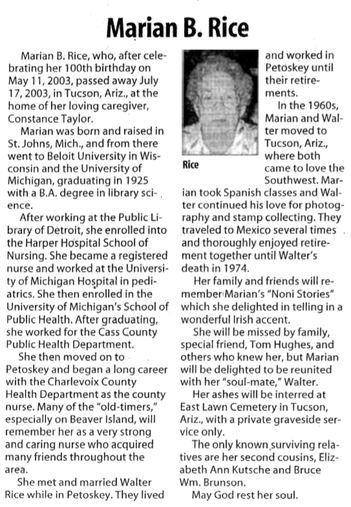 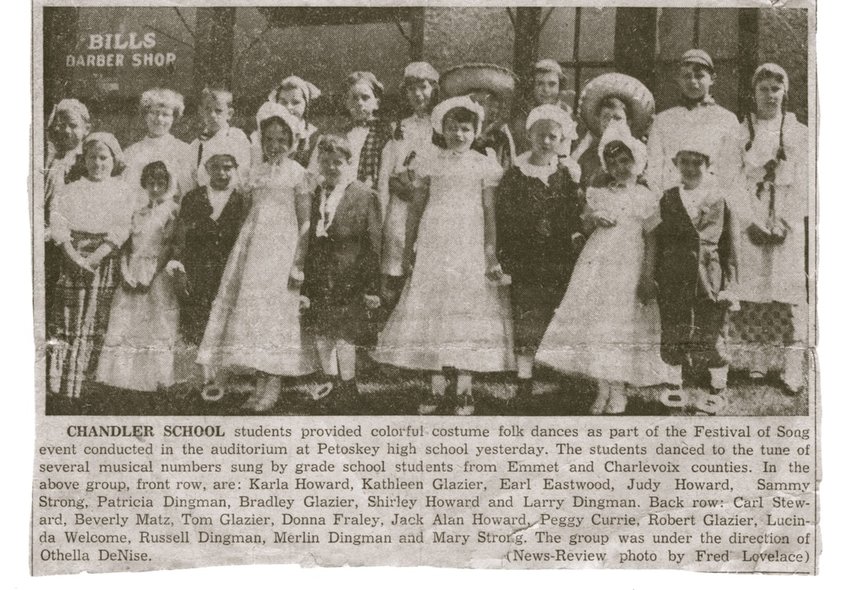 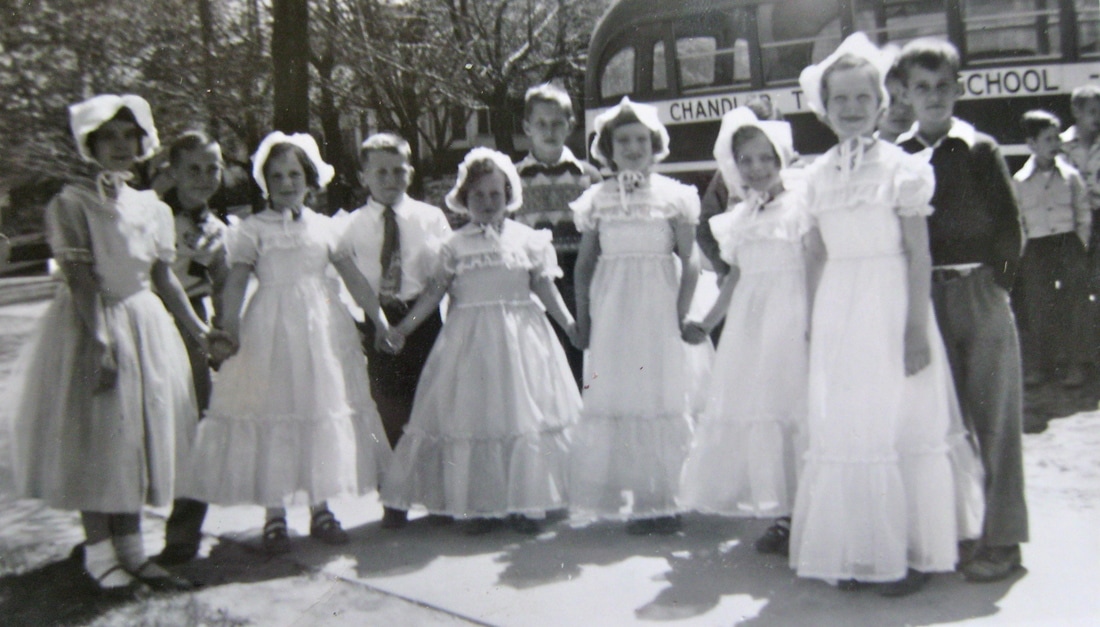 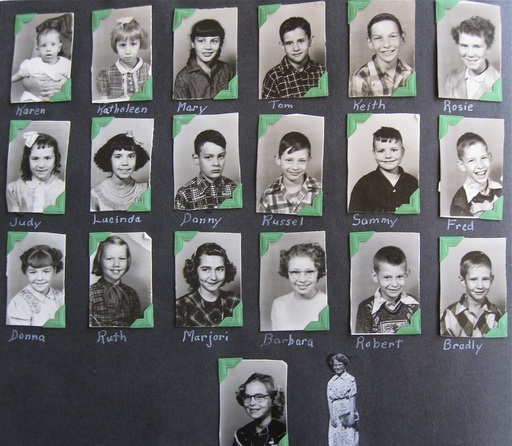 "Connie & nearly the whole bunch at the nursery were to lay off this P.M. and go to see Bud’s cattle sold. Stewarts are selling 40 head too. Did I tell you Ash, Frank, Zella and I think, the two youngest kids are going to Florida for the winter? Joanne & Kenny are going to run the farm, & I fancy Johnnie will stay too- he’s in the 6th grade now, & they bus him into Petoskey- this year. Our 7th & 6th grade- pretty soon they’ll take ‘em all, & I’m wondering if we’ll still have to pay a teacher 250.00 a month for just sitting in the empty school house?" 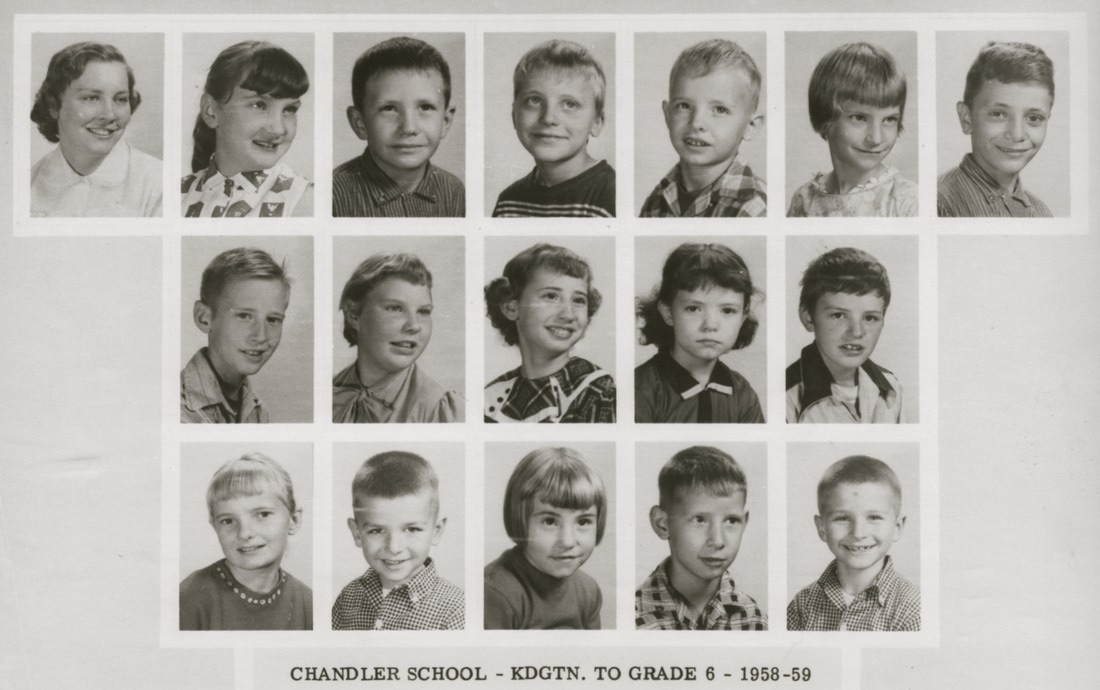 1958-59 Chandler School ~ Submitted by Shawn Beeler
Photo Above L>R from the Top: 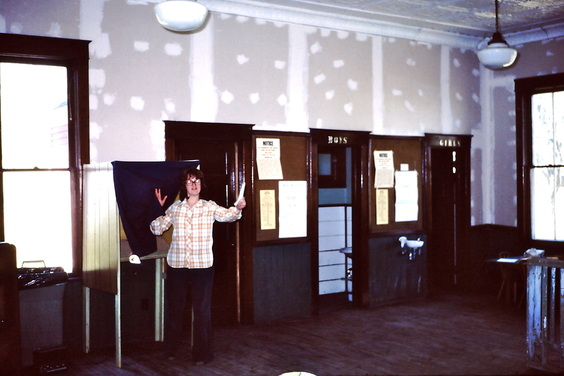 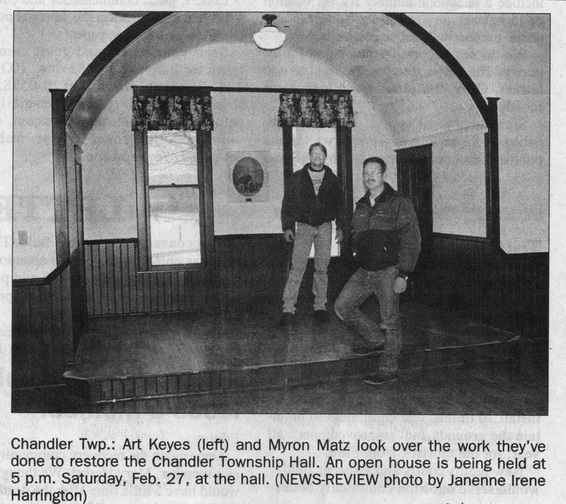 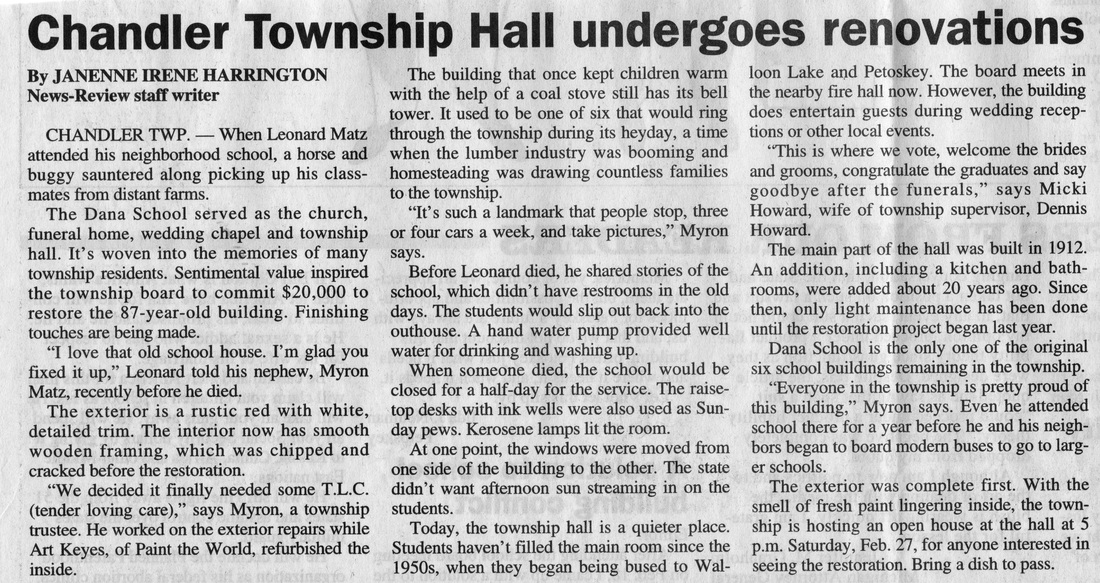 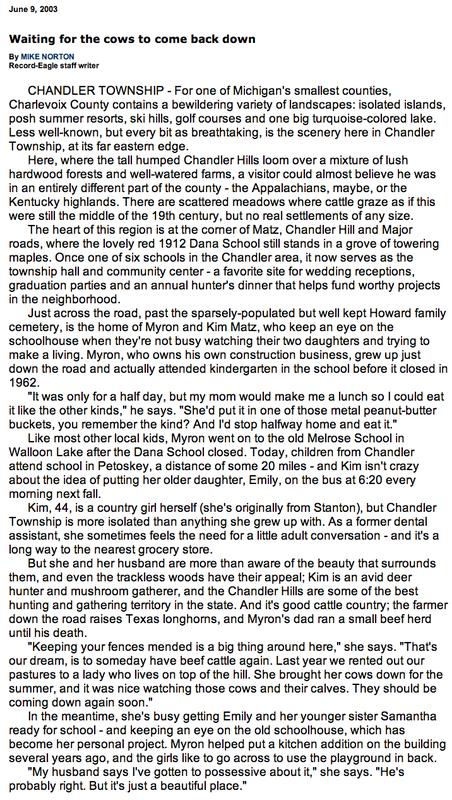 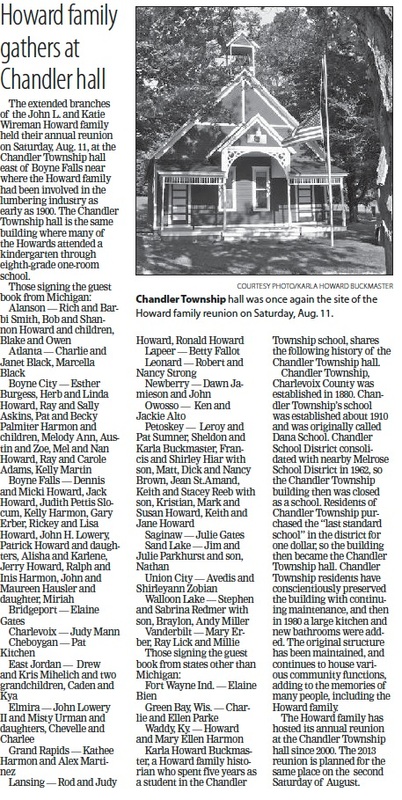 Article from the Petoskey News Review in 2012
The two photos above were taken 13 July 2013, the day when Alicia Howard was celebrating her 2013 Petoskey High School graduation with a party held at the Chandler Township Hall. Alicia, the daughter of Patrick and Amy Fettig Howard, has lived her entire life on top of Chandler Hill in Chandler Township. Alicia will be attending college next year in Georgia. 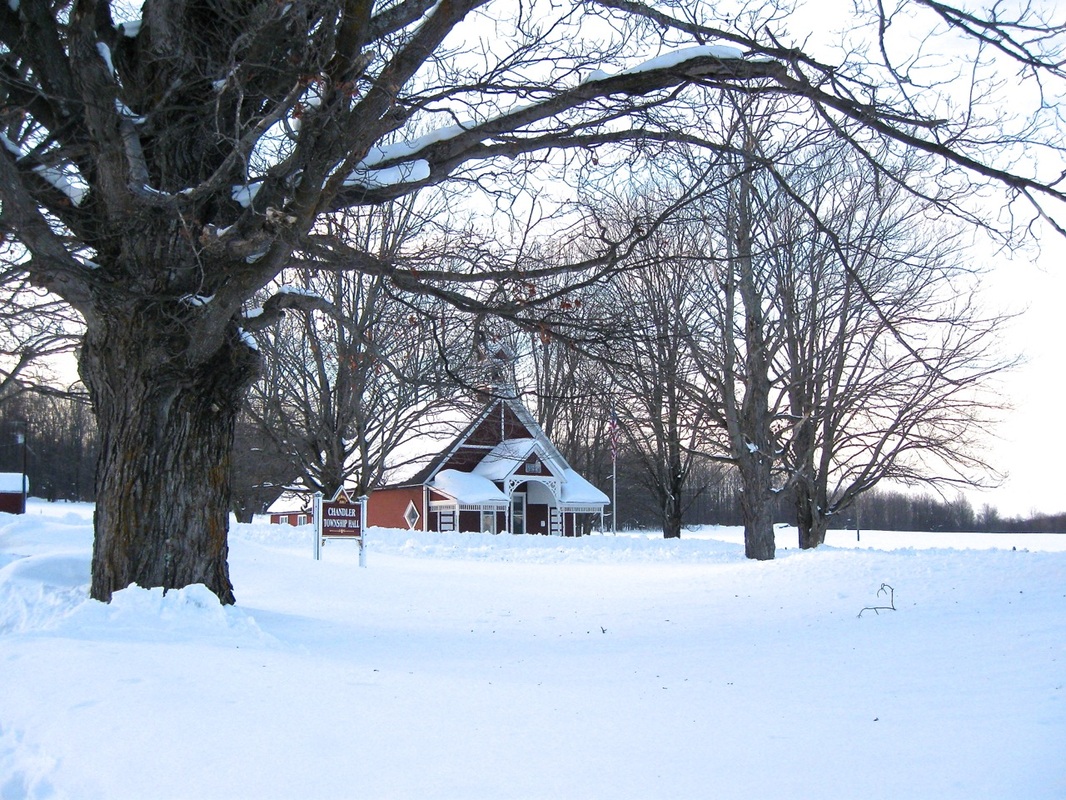 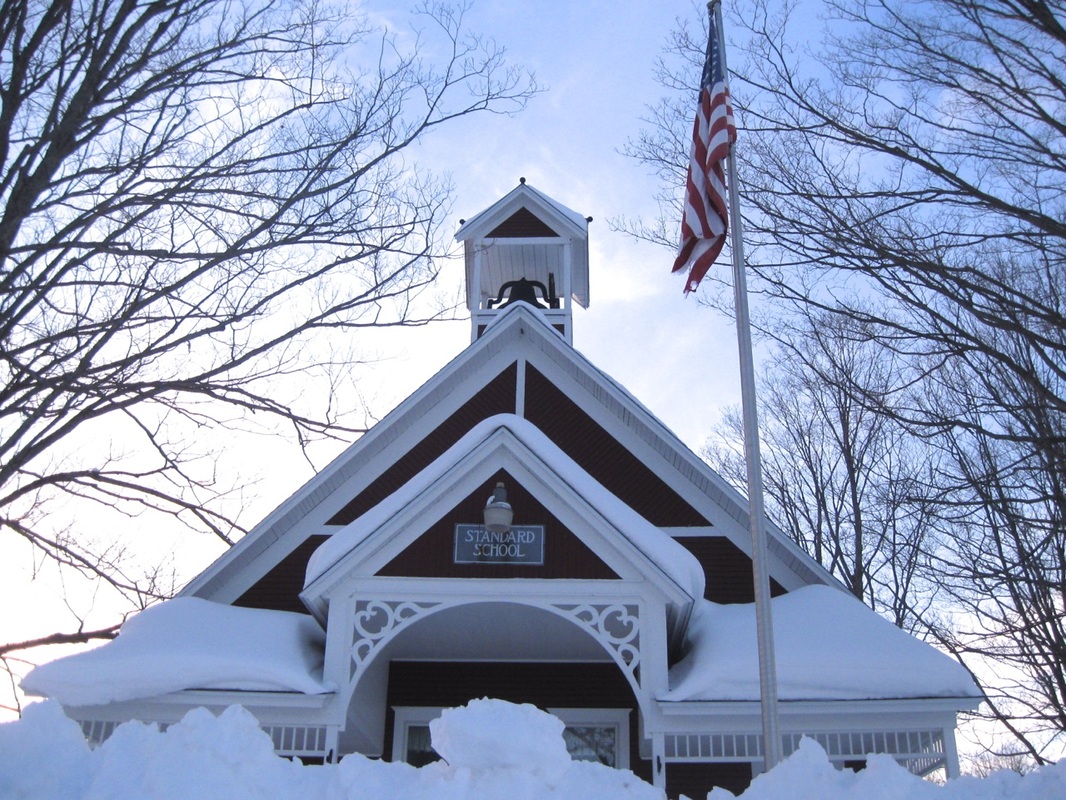 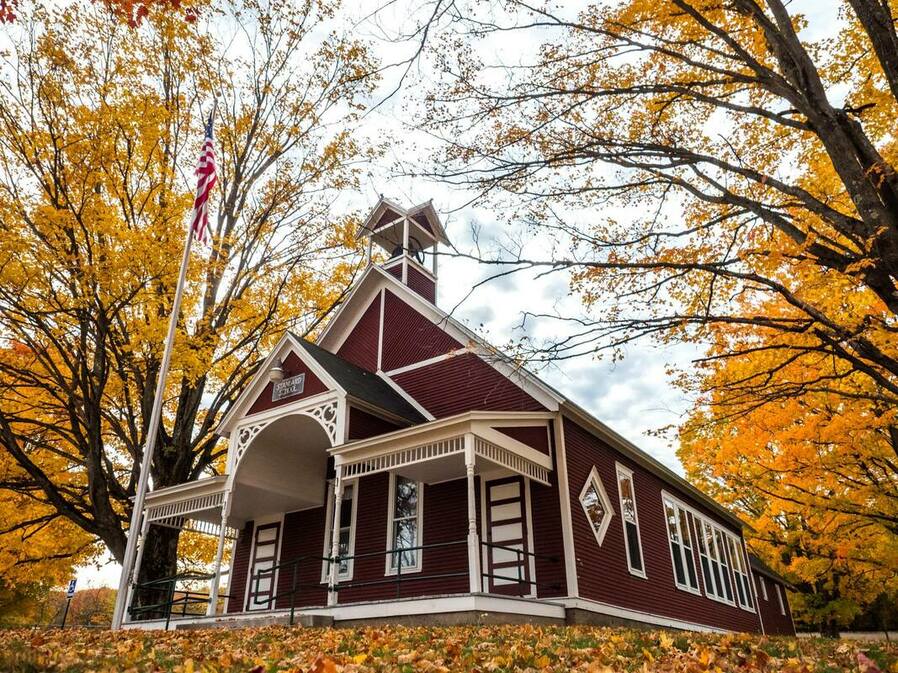 Three Photos Below: The OLD trees that have surrounded the Chandler School/Township Hall for years
have been cut and/or all the dead branches taken off. 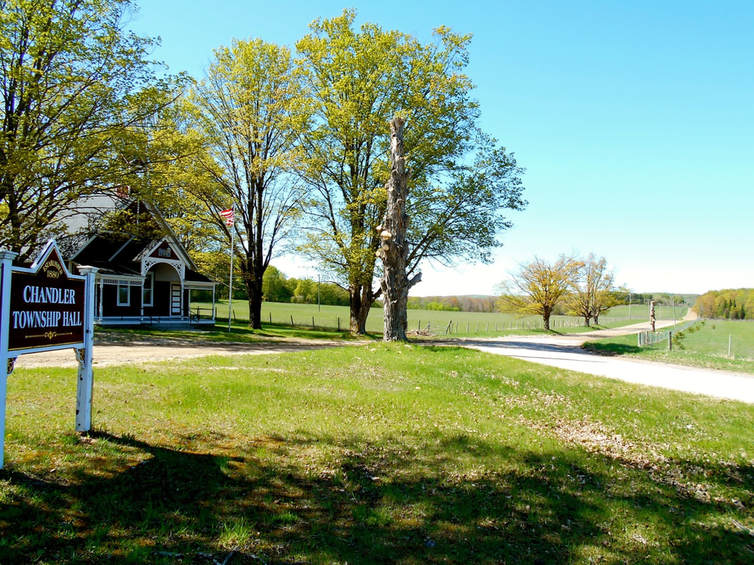 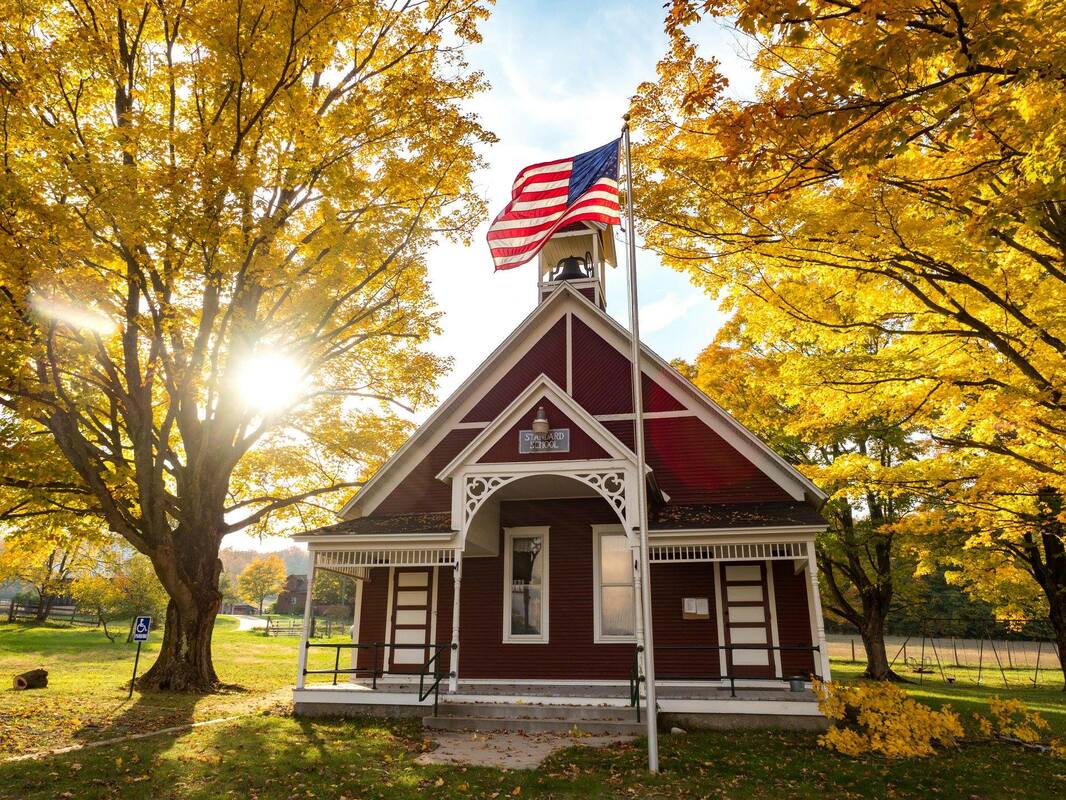 We had quite a party at the Hall on Wed. eve- a hunt supper [venison supper]. Marion [Bush Howard] & Connie [Gallop] were the parents of it and one of Vic Cannon’s orchestras played.- 3 men $35.00 Sax, piano & drums. It was good. The waltzes were dreamy- Jim Pearson & Merla were there- she’s a pretty girl, & seems sweet. Mrs. & Mr. Al Gruler, Herman Meyer & Hazel, & Mrs. Charles Galster & a lot more came from all over. They made about $96.00 clear, except for a few little bills to come in, Connie said. She can surely do a party. Creo [Mackie], Nina & Tom & their Betty [Conkright] were there too. Pat Mackie bought tickets, but they didn’t get out. The food was grand. Mrs. Galster & Mrs. Gruler went away with a large plate of venison for Mrs. Gruler’s mother (her 100th birthday was the next day)- & young Al Gruler’s wife who was in the hospital. He’s the short twin & he was there, such a nice boy- the tall twin’s in the service in Cala.- He’s Frank. Maymie was so hoarse she could scarcely speak, but she danced like mad, of course.
Top